“ Tenants are increasingly looking for a blend of space, services and the buzz of being located in a lively location” 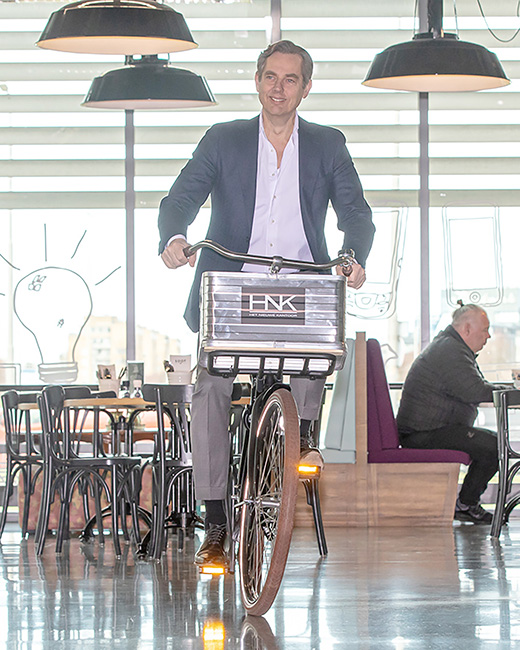 “ Tenants are increasingly looking for a blend of space, services and the buzz of being located in a lively location”

Improving performance by better understanding what your clients want. Also in real estate the centre of attention shifts more and more from bricks to tenants. In the case of HNK The Hague it is all about how to bring the two closer together. Literally. NSI has connected two office buildings at one of its larger assets and, in doing so, has quite literally built a bridge between its conventional office space and the HNK flex office concept. With great success. HNK The Hague is now fully occupied after some years of vacancy. “It’s buzzing here,” said Paul Poort, HNK Manager of The Hague and other HNK assets.

This large 15,000 m2 building consisting of three office towers is strategically located along the A4 motorway between Amsterdam and Rotterdam. In 2014, after two large tenants vacated the building, the ground floor and the first floor of the first and second tower were converted into an HNK. The managed offices (turnkey office spaces) quickly became a success. The presence of amenities such as good food and drink establishments and meeting rooms also attracted tenants to larger floorplates in the conventional spaces in the two towers which were indoor connected to the HNK club space. The third tower continued to struggle and remained vacant.

A blend of space and services
NSI used its HNK concept to respond to the trend for office space to be more serviceoriented. Whereas it used to be that start-ups would occupy trendy, flexible office spaces, these days flexibility, service and the experience are the norm for nearly every office user. Large companies are also increasingly looking for a blend of space, services and the buzz of being located in a lively location. NSI caters to both of these wishes – wishes that can reinforce each other, which is something that NSI wants to do more in the future. “Tenants want to be taken care of, regardless of how small or big they are,” Paul said.

NSI has also brought the HNK and conventional rental concepts closer together. Where previously the larger floorplates were managed by another team, now one team is responsible for the entire building. As a result the same asset manager is responsible for both the HNK part and the conventional office spaces located on the upper floors, as well as for the entire HNK Management. In particular the services. “We now have every discipline combined in one team. This creates more cross-pollination and shorter lines,” Paul explained.

An investment that pays off
Robert Sparreboom, responsible for HNK within NSI and thus the overall performance of all HNK buildings including HNK The Hague, witnessed with concern that the third tower had been vacant for years. The HNK facilities located in the first and second tower were only accessible to the third tower from outside. “The team and I put our heads together to come up with a way to connect with the clubspace.” It sounds easy enough – creating a walkway and an open stairway that takes you to the social heart of HNK – but in reality it was extremely complex. “We did not want to cause any inconvenience to the existing tenants and had to maintain a balance between the general and commercial spaces to make it all profitable. And we wanted to pull HNK up a bit so that the entire space would really flow together,” Robbert continues. “We decided to add more Managed Offices, which are, due to the strong leasing performance of the team, are almost completely occupied by now.”

“The renovation has added much more than just a connection. The stairway is an architectural piece of art, the additional daylight created by adding windows provides a more spacious feeling, and we were able to add a rooftop terrace at the same time,” Paul said. It’s an investment that will pay off soon. “After these modifications we found a new large tenant, so now the entire building is occupied, which also translates into a higher value of the building,” Robert said.

Ultimately the success of the building lies in the services and experience it provides. As the manager of HNK The Hague Paul makes sure that he knows what is happening so that he can proactively take action. “The tenants here feel like they are seen. If we hear that they need something, we look into whether and how we can facilitate it. Like now we are working on giving a space a more ‘living room’ kind of feel. But I am also lobbying the city for a pedestrian crossing to make our building safer to access. This is our mindset: we make it as easy as we can for our tenants.”